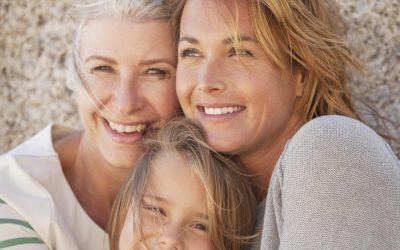 It has been demonstrated that women’s gums have certain peculiarities that make them more susceptible to changes, compared to those of men.

Women’s gums require special attention and especially at certain stages of development in their life. The reason why they are more affected than men is due to hormonal changes. Hormonal changes make gum diseases more vulnerable because of female hormones (estrogen and progesterone). The increase in hormones in certain periods of their life cause more blood flow to the gums and make them more sensitive and susceptible to any external agent that can irritate them. When hormone levels are high, the gums are more sensitive to plaque and bacteria, making it prone to inflammation and bleeding. If gum inflammation (gingivitis) is not treated, it can progress in periodontitis (inflammation and loss of the tissues which surround the tooth).

The gums of women during PUBERTY:

During puberty, the increase in hormone levels causes higher blood circulation in the gums. As a result, they tend to swell and may have a greater tendency to bleed.

As a young woman grows, the tendency of bleeding decreases. However, if proper prevention is not performed, the gum can be permanently damaged.

The best way to prevent this situation is with daily care of the teeth and a regular visit to your dentist to perform periodontal preventive measures and early diagnosis in case of more serious problems.

The gums of women during PREGNANCY:

The gum also undergoes many changes during pregnancy. Frequently, pregnant women suffer more gingivitis from the second or third month. This disease is characterized by inflammation, bleeding and a red color of the gum caused by the accumulation of plaque. There is a risk that the bone and other tissues surrounding the teeth can be permanently damaged if no treatment is performed.

Patients in periodontal treatment should take care of maintenance during pregnancy because often the condition of the gum worsens during the pregnancy, therefore now more than ever it is very important to visit the dentist. The indicated time to do gum treatments is during the second trimester.

Research studies show that periodontal disease in pregnant women can be a risk factor for the birth of immature children. Maintaining good periodontal health is the mother’s best interest to have a healthy child.

If you are taking oral contraceptives, you may be susceptible to the same symptoms that affect pregnant women.

The gums of women during MENOPAUSE:

The most important effects that women can suffer in this stage of life is the sensation of dryness and irritation.

If you use estrogen supplement patches, they will barely affect your mouth. However, progesterone may increase gum irritability and the tendency to swelling, bleeding and redness.

Sometimes, after menopause, a certain degree of osteoporosis appears. Osteoporosis has recently been linked to a greater tendency to suffer from periodontal disease. In these cases, gum health care should be a priority objective in the affected women.

If you want to know more about gum diseases and how they are treated, click here.

Any cookies that may not be particularly necessary for the website to function and is used specifically to collect user personal data via analytics, ads, other embedded contents are termed as non-necessary cookies. It is mandatory to procure user consent prior to running these cookies on your website.